Home News A gift or a Trojan Horse? Reasons why Executives, Management and the team must say No to gifts. Corporate Governance Series

The Trojan horse has been described as the mythological wooden horse that was brought into the ancient city of Troy during the Trojan war, as a trophy; but unknown to the people of Troy the horse was filled with highly skilled Greek soldiers who at an opportune time when the city was asleep came out from their hiding place, attacked and conquered the city.

Executives, Management and staff should be very wary of receiving gifts which may be offered with apparent gratitude, respect and good wishes for a wonderful working relationship from would be vendors, contractors and others. Receiving such gifts can create the belief in the gift giver that there is opportunity for reciprocity of some kind.

Gifts offered in business relationships where the giver’s intent could later on prove nefarious must be avoided at all cost. Many companies have gone through the task of creating a gift policy, but must not stop merely at creating the policy; companies must train their staff on the pitfalls of receiving gifts in the course of employment and explain in language that all levels of the team can understand the reasons why the policy on gift giving is in place.

The tone at the top is also very important as staff members will scrutinize top level management’s behavior and use their observations to inform themselves whether or not the company is serious about the gift policy.

While in some cultures it is rude to refuse a gift; in The Bahamas in particular, where growing up we’ve always been told “don’t go nowhere with your hands swinging”, business personnel must nonetheless ensure that they do not compromise their and their firm’s ability to act with independence toward business partners, and not be placed in a position where demands could be made of them and their companies that would not have been possible, had they not placed themselves  in such a vulnerable position by accepting the ‘Trojan horse’ gift.

How does one refuse what appears to be a well-intentioned gift? Policies properly laid out and displayed throughout a company’s property could be pointed to, the employee handbook (providing there is such a provision included therein) could be quoted, the gift giver could be advised that Human Resources should receive the gift and that the gift will be shared among the team, or the gift giver could be told that there is no need to show gratitude, that if they are awarded the contract all that is expected is high quality work.

Companies must also compensate its employees adequately.  This safeguard ought to work in two ways. First, staff will not be enticed to take gifts if they are well paid and happy; and secondly, staff will not want to compromise their well-paying jobs for a gift.

Additionally, it is necessary that the company makes its potential business partners and clients aware of its policy on gift giving.  Companies should place on company website the gift policy so that all potential vendors, clients and others can have access to the policy.

It is important that staff in both public and private sector are aware that the Prevention of Bribery Act provides that it is an offence to receive gifts and benefits for the doing or forbearing to do one’s job, to use one’s position to assist in the provision of a contract or pricing of a contract or treating one of its employer’s business relations more or less favourable than another.  The Prevention of Bribery Act also makes it a serious offense to offer a civil servant a gift or benefit in the course of that civil servant performing his/her work.

In conclusion the analogy of the Trojan horse provides the picture of what could occur in businesses if a gift is received and the intent behind giving the gift later proves conniving.   A beautiful and thoughtful gesture made in the form of an extravagant gift to a staff member with influence in the company, could very well become the downfall of the company’s governance and ethics regime.  Receiving gifts could lead to the following: less qualified vendors being awarded contracts as a return on the gift, reputational damage and loss of the Company’s goodwill; and certainly can compromise the recipient of the gift’s ability to make unbiased decisions regarding the gift giver.  All of these can lead to the demise of the company. It is therefore advisable to say No to gifts given in the course of doing business.

Thank for guiding us through the new lease agreement and working out the very complex lease issue. 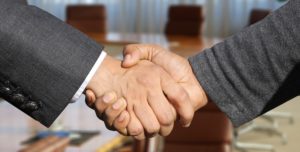 A General Counsel who knows how to help businesses succeed